Filled with love, and nothing else but love.
He continuously licked my head and the bottom of my chin. There was no fear. There was no anger.
He kept his stunning beautiful, loyal, loving brown eyes focused on me. His eyes filled with intense love……. he never, not even a second, looked away from me while the vet attached the drip.

He looked at me and I knew then already … This is going to be a party animal. Beautiful fun eyelets. “Yes master … that you did not expected hé … but this what I can do already at this age “and he walked away with a piece of clog in his mouth. He offered it to Dayca, and jointly they wrecked the rest of my clog.

He grew up and became the ultimate athlete. 40 kilos of pure muscles, not the slightest trace of fat tissue. A beast of a dog to see but he always stayed the naughtiest little boy of the classroom. He always remained that little scumhead that terrorised the neighbourhood. OH my god… he wanted to swim so badly, but that remained just a wish for him…..simply too much weight there. Mission impossible!

A life without worries. With an awful lot of fun. Everywhere you came with us. Everywhere you wanted to be with us. You always wanted to join in. Building our wooden shed, placing the fence, bricklaying the BBQ, Saint Nicholas parties, on the 5th of December, to shred the wrappings of the presents, Christmas, New year’s Eve, birthdays, and especially during the last years offering solace upon the death of my beloved ones. Growing up together with my daughter. You are a puppy … she is a puppy. Both born in the similar period. Both arriving “home” at the same time…

A life without worries until … until he turned 7. I felt a lump on his rib. Such a lump that you, if you have previously felt it, immediately recognized it. Cancer. It was already far. Very, very far. It was a terribly heavy operation for him and his chances for survival were minimal. We decided to have him operated and against all odds he survived. He lived. To the fullest. In full glory. With a lot of fun. He kept on annoying everyone around him. The master of Naughtiness. With its beautiful, stunning, loyal, loving Brown eyes. So crazy to enjoy the sun. So crazy about us. And we, so crazy about him.

4 years were given to us after the operation. That operation that actually was too heavy to survive. 4 years more of unconditional love, the real love of a dog is a gift. 4 years extra of pure enjoyment and blessed to be able to love this beautiful happy animal. 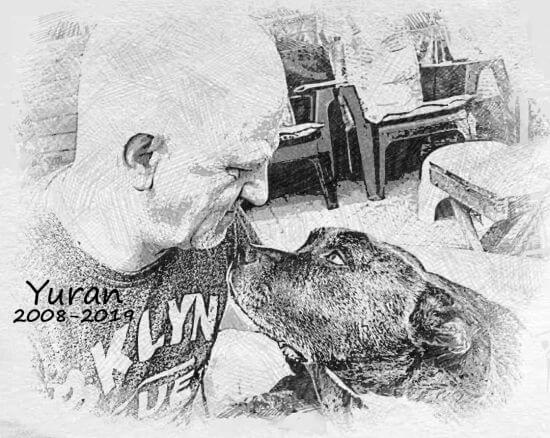 28th of December … his sweet sister Dayca died … We had to put her to sleep. This had a tremendously effect on Yuran. He stopped eating. Continued to look for her. He didn’t understand what happened. Where is Dayca?? … You could see literally asking himself this question in his head. His muscles began to dwindle. His humour faded. He was in mourning as we thought. For a few weeks, thank God, his humour came back again, but unfortunately not his appetite.

Researches. Many of them. Painful and long-lasting. He took it all. Not even the slightest growl, no bare teeth, no lip lifting….not even 1 aggressive sign! He all let it happen, in full confidence because his owners, his friends, were there.

“99.9% sure Your dog has a tumour; it is better to euthanize” was the result from our vet. I refused to believe this. We refused to believe it. I know my dog inside and out. This was not a cancer. We climbed higher and higher on the ladder of experts. Until at some point the highest step of the ladder, early February, said: “terrible news, but your dog has only a few days more to live”. We were broken by this final result.

Our dear Yuran proved once again to be a fighter. The few days given became a few months. A few beautiful, more than beautiful months. This was not an “express” farewell. But an amazing journey which in which we prepared ourselves for the final “goodbye”.

He has fought so incredibly hard to stay with us. Despite the fact that he has lost this battle, he has won the war! His fighting spirit, his character has brought him so much further than any doctor would have had predicted.

Today his eyes looked upon to us for the last time.
Filled with love, nothing else.

He continuously licked my head and the bottom of my chin. There was no fear. There was no anger.
He kept his stunning beautiful, loyal, loving brown eyes kept focused on me. His eyes filled with intense love……. he never, not even a second, looked away from me while the vet attached the drip to him. He kept on looking at me Full of love. Bursting full of love.
This all in his favourite basket, on his favourite rug, outside in the open air, under the sky, enjoying the Sun as he always did.

He loved us, he fought for us, we fought for him.
Until his sweet little nose, in the presence of the three of us, drew his last breath gently against my face.

Oh dear Yuran … How much we loved you, and how much you loved us.