When we talk about speed, sensation and action for our American Staffordshire Terrier, we are talking about Flyball. Flyball originates from the United States of America. It started in 1970 and following onto that the North American Flyball Association (NAFA) was founded in 1985 and since 1990 this spectacular sport is being practiced in the Netherlands as well.
Just like agility, Flyball is also a sport which is recognized by the F.C.I. The “Raad van Beheer” regulates this particular dog sport in the Netherlands.

It is a beautiful sport for active dogs and also a social event for the dog as well as for the owner. The fast-growing popularity in many countries is partly due to the fact that it is not only a sport for pedigree dogs, but also non-pedigree dogs can be involved and participate in these Flyball races. There are all kind of different breeds participating at European and global level. For each level, there is a separate division made where dogs are put in categories based on their speed, which means that our American Staffordshire Terrier can participate as well in these races and thereby be competitive as well. It’s an exciting and spectacular sport, which is a real pleasure to watch.

Normally, a dog can learn this sport in a number of months. Initially, individual classes are given here. With a little bit of luck, your American Staffordshire Terrier can master this sport within a months time. It is advised to start with this sport when the dog is at least older than 10 months, but here as well, we recommend not to start with this sport with our American Staffordshire Terrier when they are too young, we think taking an 18-month guideline is not a bad idea.

Flyball is the only team sport within all the dog sports. A competition team consists of 8 combinations (dog + handler), 1 ball loader and 1 coach. There are 6 dogs in each team, with the limitation that of these 6 dogs a maximum of 2 dogs can be of the same breed. According to the F.C.I. in Holland a team who participates in a tournament can consist of no more than two dogs of the same breed or variety. A dog without pedigree, which looks like a certain breed, is considered to be a species of that specific breed that he or she looks like. E.g. A crossing American Staffordshire Terrier with the appearance of an AmStaff is considered to be part of the American Staffordshire Terrier breed.

Each race is run by 4 dogs, this can be a different combination every time of 4 out of the 6 dogs which are present that day. The coach of the team determines which dog is running and in which order they run. The task of the ball loader is to ensure that each dog catches the ball in the correct way and also supports the dog verbally in such a way that it provides maximum performance for the team.

The coach looks after the overall performance of his own team and keeps an eye on the competitors of the other teams. He ensures that the team is present on the right racing track at the right time, he motivates his people. Provides support, but most important I think is that he makes sure that there are no mistakes being made.
The individual handlers of the dogs must ensure that the dogs get prepared as well as possible. Once the dog starts it’s run, the individual handler must ensure that the dog starts correctly and that it finishes it’s run as quick as possible. 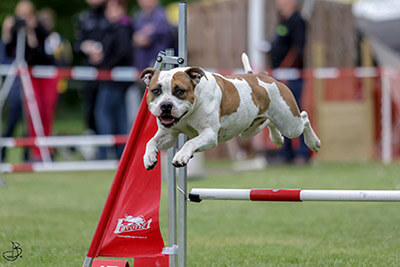 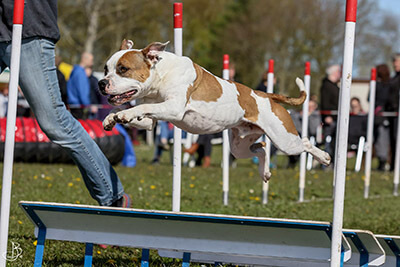 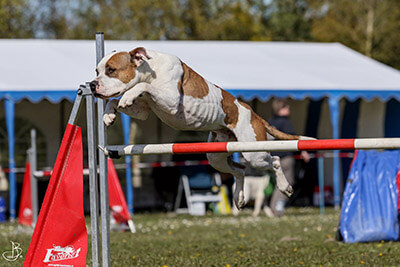 In the Netherlands, the matches are always divided in two runs, one in the morning and one in the afternoon. In the morning, the runs are only based on time results. Each match consists of 2 races and each team runs against all other teams in the same class. The 6 best times of each team are added together and based on those results the starting order of the individual teams is determined for the afternoon.

In the afternoon the knock-out rounds follow. This goes according to a predetermined schedule, depending on the number of participating teams, the entered teams will battle against each other. Each game consists of up to 3 races, of which 2 must be won to continue to the next round. If lost, this does not mean the end for the team. The team will enter the loser group. If lost in the loser group, this really means the end of the competition for that day. On the other hand, a team can get into the finals and lose this final the first time but still gets a second chance to win this final. Mainly because every team has to have a second chance if they lose once. By the way, the opponent in the final is always a team that comes out of the losers group.

The knockout laps are extremely exciting for the participating teams and for the supporters. After all, a small mistake of a combination, which otherwise never happens, can be fatal. You see, therefore, that the handlers will go to the limit, within the regulations, of course, to get the dog finalize the run as quickly as possible and without any mistakes.

The length of the track is 15.55 meters. 4 hurdles are placed on the track, and they are placed at a distance of 3.05m from each other. The height of the hurdles is at least 17.5 centimetres and with a maximum of 35 centimetres. The height is depending on the height of the team’s smallest dog. These hurdles must of course be taken by all dogs. Only when the previous dog returns over the start and crosses the finish line the next dog is allowed to start. The team that finishes with 4 dogs over the finish line flawlessly is the team that gets the victory.

In order to optimize the speed, they work with flying starts. This is possible because with flyball they work with starting lights. On the finishing line, there are a set of integrated sensors which register when the dogs starts and when they change. In case of an error, a light will show up and the dog who made a mistake must run again. Each team is allowed 1 false (too early) start. At a 2nd false start the heat will continue.

The world’s fastest teams are currently running in the United States. The world record is in the name of Rocket Relay at this moment, with 14.463 seconds. There is not that much difference between the achieved times in Europe and the States, the fastest times over here are currently around the 16 seconds.

The biggest difference between the U.S.A and Europe is that in the States the competitions are mainly run indoors, in Europe this is mostly outdoors. The Dutch record is currently around 20 seconds.

For game rules and specific information, please visit the website from the “Raad van Beheer”