An American Staffordshire Terrier as a therapy dog will be an AmStaff who will be trained to share its affection and who will make people feel comfortable. This can be, for example, in clinics, rest homes, residential care centres, schools, or institutions. They can be of great help in disaster areas as well. People or patients with autism, movement restraints, or Down syndrome often find great support in this form of therapy.

Main characteristics of the dog

There are several institutions in the Netherlands that specialize in the training of these type of dogs. Main characteristics that the puppy or mature dog should possess are:

All of these points are usually recognizable in the American Staffordshire Terrier, of course, as long as the dog is a result from breeding from a balanced and a correct bloodline. Our breed is a sensitive breed that picks up emotions very well and has a gentle character. At an older age, he often perfectly peers the mood of another person. Another striking characteristic of our breed is, for example, that they often prefer not to get involved in a fight.

In addition to this all, we often see “clownesk bully” behaviour: making everyone “crazy” around them, they let everyone run around and then sit down and watch the stage play. The behaviour of our AmStaff will be the same as with any other dog, it will be formed by the dogs basic character and the influence of its education, environment and learning experiences. All this together, makes the American Staffordshire Terrier a beloved and very good therapy dog.

Patients who work together with an AmStaff therapy dog dare to open up more towards the dog, they feel that the dog takes them as they are, they feel automatically attracted to animals and often take them out of their own world (often by asking continuous attention and keep this up), they are encouraged to talk better, they are stimulated to play with the dog first and later with their own brothers / sisters and then followed for example with children at their school, patients feel safer and relaxed near the dog , They feel more emotionally balanced, they get calmer, make contact easier, and ultimately they get more self-esteem.

The reason to specifically address this part is the fact that the American Staffordshire Terrier is often seen by many as a “fighting machine”, the above text emphasizes once again that our breed has multiple faces and thereby can help our society in a variety of positive ways. 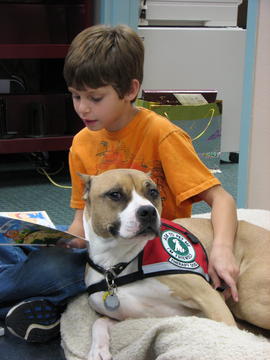 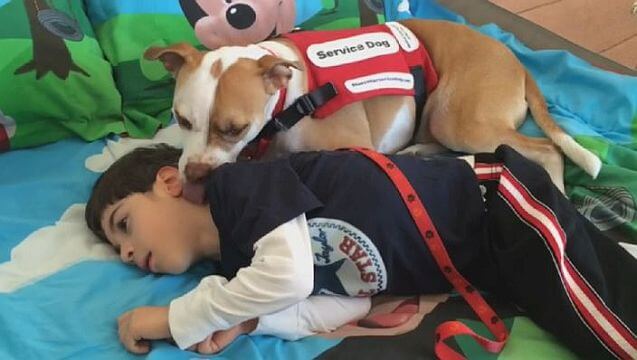 As addition to this subject I have to mention the value an american Staffordshire can have in relation to dementia and Alzheimer. Yet now dogs are also being trained to provide companionship and help in these situations.

I actually got to experience it myself one day in my own environment. We had an older member of the family visiting us for a while. Physically she was more than OK, but the family was worried about her mental condition. It appeared that she had more and more difficulties with remembering details.
As she was not really familiar with dogs, we thought it would be a real challenge for us to have her at home. In actual fact, when she was younger, we knew the last thing she could herself imagine was living together with a dog under 1 roof. Let alone a “dangerous” dog like the american Staffordshire terrier……

She was aware herself that her mind sometimes was not as crisp anymore as it used to be. At times she did not remember what she ate in the morning. Let alone what she was supposed to do later that day. Because she was aware of all this, the easiest thing to do was to retract herself of everything that involved human interaction. Resulting that she would become more and more an anti-social human being. There came a point that she preferred to be alone, and read a book… as far as that was possible…
Until one Sunday, on one of my days off from work, I was preparing some food in the kitchen, and whilst she was standing next to me. I was talking to her. The oldest member of our amstaff pack was standing as always next to us, observing us, and obviously cheerfully hoping that I would drop some left over from the food on the kitchen floor.

As I knew, and being told, dogs were not her favourite “thing”, therefore I saw it as a personal challenge to ask her if she would like to give the dog a piece of fruit that I was cutting at that time. She looked at me with a face full of fear and disgrace and she asked me: Would she not bite my hand off if I gave the food?!
I smiled, and put her mind to rest. I said to her: Just say her name, ask her to sit down, reach your hand out, and give her a small piece of fruit. And so, she did.
What followed was a beautiful smile that appeared on her face! I mean, from completely ignoring dogs, to a sort of: Look what I just did! Look what I achieved! She asked me the dog’s name and there is where it all started!

She tries now actively to remember the name of all our dogs. She has even written down on a piece of paper all the names of our dogs and the characteristics of that particular dog. You can clearly see now that she likes the interaction with them. Especially the older ones. I try to keep the younger ones away from her because they don’t have the “feeling” yet which is necessary to possess in these kinds of delicate situations.

Where before, in the early days, she got upset if she had a dog’s hair sticking on her clothes. She absolutely did not like it when they “kissed” her. Now, they are watching TV together, she is stroking them, talking to them and sometimes even singing songs for them…. It’s heart-warming to see that a completely whole new world has opened up for her.

The point I like to make here is that I have definitely seen a more than positive change in the attitude of our older family member. She looks happier. She now loves the interaction with the dogs. We notice that interaction with the dogs stimulates her brain. We ask her from time to time the names of our dogs, and we see then that she really does her best to remember these names. We ask her little details why she prefers another dog more than another one, which makes her use her mind as well. We are amazed what little details she picks up at…if she would have started the interaction 50 years earlier. I am sure she would have the potential to become a good breeder… 😉

So, at the end, for me it’s sure that dogs (and especially dogs which are trained for these situations) can make a huge difference. The difference between fading away, and having something to look forward to. As Max has said in the past: “Life would not be the same without them!”

At the moment we are having a litter. A litter by one of “her” favourites. We are impressed to see that there is even a step up from the previous situation. She now studies in detail the new-born puppies. Tells you in detail why she loves them. And more, and more….. Besides we are ourselves over the moon with this litter, we are over the moon as well to see that these little miracles made again a big difference to somebody who is affected by Alzheimer or dementia.